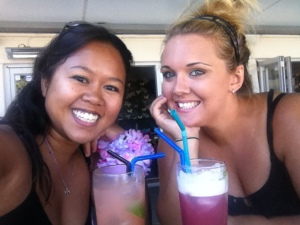 Today we drove to the Western Springs Stadium to attend New Zealand’s annual Pasifika Festival . This was their 21st year, and first year having expanded the event to 2 days. Thousands of Aucklanders come out to enjoy the markets, traditional foods, arts and crafts and musical performances. The festival is setup into 10 unique villages that showcase the cultures of 10 Pacific Island nations: Cook Islands, Fiji, Kiribati, Niue, Samoa, Tahiti, Tokelau, Tonga, Tuvalu and Aotearoa. There were over 220 stalls to purchase items or food from. 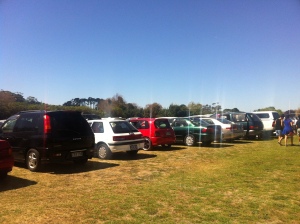 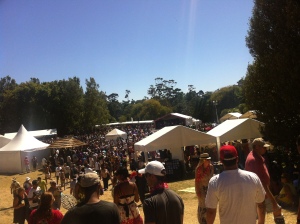 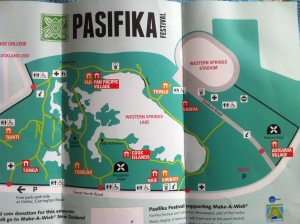 Emzie and I went on the first of the two days. Parking was a nightmare! We ended up having to park so far away in some open field. The field had been converted into a parking lot for the event. We felt like we were paying $10 to walk. We probably would not have been so grumpy of the distance except for the fact that the parking felt like such a detour away from the event. It was HOT hot humid sticking hot! By the time we got in (free entry) all we were seeking was shade and cold beverages.

All the volunteers and people coordinating the event were friendly and upbeat. We received lays and a map upon entry. The layout of the event appeared to be pretty much taking the form of a circle. We thought if we just stayed on the foot paths we would be able to hit all the villages showcased. It was really crowded and we got turned around a few times. We found some of the villages to be more labelled than others. Some of them were humming with stalls and performers while others were very laid back…very. We were confused whether some of the event stalls were just hosting family gatherings or if they were actually selling things in the stalls.

A lot of people came out to support the festival. It was a great showing and lots of food was purchased. There were so many food stalls at each of the villages we both were overwhelmed as to where we should buy food. Some stalls had no signs yet there would be long lineups. We guessed that word of mouth was how people knew which stalls were selling what?? We tried to go just go with the flow and enjoy the gorgeous weather and crowds for what it was. We got a lot of (unintentional) exercise and fresh fruit. We both bought fresh pineapples that had been somewhat hollowed out to make room for ice cream. What we really wanted was a beer garden or stalls that were selling fruity drinks with little umbrellas. Yes we are girls!! After we finished seeing the majority of the stalls we headed straight to Brown’s Bay for some refreshing drinks.

I was happy that the festival was such a success for all those involved. It’s a great day for the locals to all meet up and have a weekend gathering. I am not sure if I would go back again. It felt very too crowded and unorganized to me. It was hard to discern which stalls had items for sell or which ones were meeting places. Also many of the stalls that were selling items were so crowded with the sellers and their families that there was no room to move around and look at their items. SIGNAGE would be my number one advice.

I know it took me a long time to post this but I am glad I finally got around to sharing my thoughts and some pictures. Thanks for reading.

Thanks for taking time out of your day to read my blog. I love being around people that smile and contribute to my happiness. xoxo