During one of my English classes in College, my teacher assigned us all narrative essays. It would be used as a writing sample and  help her to access our growth by the end of the term. I thought I would share portions of my paper with you. This is not the completed original version as I deleted parts of it and tried to fluff out a few details.

Throughout my twenty four years of life I have never needed to question the fact that I was adopted. Not once have I felt the need to ask my parents if I were blood related. The simple fact is that I have brown skin and prominent brown eyes and my two older brothers have white skin and blue/green eyes. Never have I felt compelled to question whether the woman I called, “Mom”, was actually biologically related to me. Our difference in blood never seemed to affect my bond with my two older brothers.  In fact, our relationship continues to remain solid as the years go on.

My parents had two biological sons together before deciding to adopt a daughter. My eldest brother was born in 1984, followed seventeen months later by the birth of my other brother. I have never met my birth parents and know nothing about them. I have always called the adults that adopted me, “Dad and Mom”. They are the only parents and I know and the only people I consider deserving of the title of “my parents”. They discovered me at the Phayatai Orphanage also known as Babies home. The orphanage was located in Thailand’s metro region of Bangkok. Since the late 1990’s the orphanage merged with another orphanage named Pakkret. When the two orphanages merged together it took on the name of Phayatai Orphanage and became the largest one in Thailand. The lengthy adoption process for me to become a MacWilliam began in the middle of 1987. 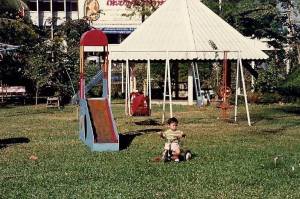 My eldest brother is two years older than me, and the other is five months older. We grew up attending the same schools together. School is where I first started to realize I was “different” from my brothers. When I was not with them I always just assumed that people knew we were a family. My peers started to make assumptions about my family. It was never a second thought to me that the two boys I had grown up practically my whole life with were my brothers.  Classmates who did not know the inner workings of my family would immediately jump to the conclusion that my whole family was Thai. Most would become beyond shocked when I would state that my brothers were both over six feet tall and had blue/green eyes. They would take my statement as a silly joke or some mistake I had just uttered. The best reactions would come from showing a family picture to some classmates in grade 12. I could read their expressions; the utter shock and confusion that would rush over their faces. Most were politically correct in their responses, “Oh that’s nice. Or that’s a nice looking family.” Truthfully the expressions I enjoyed best were the ones that were completely uncensored. Once I showed a picture of my family to my friend and she immediately blurted out, “they are white”! Just complete shock that the whole time we had been friends she had just assumed my family was Thai like me. A friend who was with us at the time was embarrassed by the outburst which made me laugh that much harder. The uncensored reaction was more welcomed then the uncomfortable feelings people often tried to hide upon their discoveries. (A note to be made is that I was living in a boarding school at the time so no one knew much about my family or ever met any members).Once when my family was on a trip together and my brothers and I were in our teens, a couple in their early sixties commented to my parents that, “My your two boys and their friend sure play nicely together”. My parents were quick to correct the nice couple by informing them that those three kids were siblings and they have always grown up enjoying each other’s company. To this day I still somewhat enjoy seeing people’s reactions to discovering my brothers have a different skin colour than me. When I am telling people stories about my family I never feel the need to mention the difference in their colour skin to mine. It does not matter to me. It is just an assumption that people cannot help to make and I’m accepting of that.

I do not care in the least that I was adopted into a Caucasian family instead of an Asian one. The colour of my skin has not negatively affected my bonds with my brothers or parents. People will see me and continue to assume I have brown siblings and parents and I will be more than happy to correct them proudly when the timing is right.

–>Reading this paper back makes me wish I had the energy to write an autobiography! Sometimes the mood hits where I LOVE WRITING!

The topic of my skin colour in comparison to my family’s does NOT affect my bond with my family. What does BOTHER me is how people always come up to me asking me where I am from BECAUSE of the colour of my skin. I will end this post now but promise to make one on the subject of having brown skin….I know my friends will laugh when they read it as they are constantly witnessing or hearing of my “Filipina stories”.

I have been on a roll with this blogging! I will warn you that my updates will slow down soon. Right now I am just completing and tweaking all these notes I have on my computer. Soon I will have to start my posts from scratch again.

As always, thanks for reading!
Buddha Blessings to everyone,
xox Amanda Sumalee

Thanks for taking time out of your day to read my blog. I love being around people that smile and contribute to my happiness. xoxo